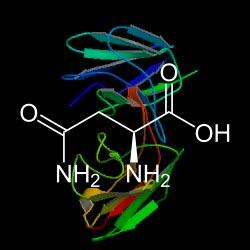 Ovotransferrin, a protein abundant in hen egg white, shares many of the same activities as human/bovine lactoferrin. Ovotransferrin combines iron transport and the defence functions of mammalian serum transferrin and lactoferrin,  respectively. It also shares approximately 50% of the sequence homology with each protein. However, the structural analogy between ovotransferrin and lactoferrin is much closer than the sequence homology and similar clusters of positively charged residues responsible for different activities such as antiviral/bacterial, immunomodulatory, antioxidant and anti‐inflammatory properties. In addition, this protein has been demonstrated to be able to supply iron to cells. Ovotransferrin is readily digested by pepsin in the stomach and the bioactive forms of ovotransferrin are readily transported into human intestinal cells. Despite a large body of evidence that supports the beneficial impact of various lactoferrin preparations on human health, there is still very little information regarding the mode of action of lactoferrin, and whether saturation of the protein with Fe affects its function and is also similarly observed with ovotransferrin. Given this premise, in this study, we analysed the release, absorption, and biological activity of ovotransferrin from hen egg white with a different iron saturation rate and bovine lactoferrin using a well‐characterised in vitro model of the digestive system mimicking the human gastro‐intestinal system both in the presence or absence of Fe3+. The findings obtained in this study demonstrate that holo‐OvT was able to maintain a higher significant beneficial effect on cell viability and integrity compared to the other holo‐OvT and bLact tested, in both gastric and intestinal compartments, confirming the important hypothesis of the iron saturation rate to obtain beneficial effects.